Popular in Russia (with variations still in use in The Ukraine), The Baidak was first documented in used around the mid-16th Century. They were similar in usage to the English Cog (for transportation of persons and cargo) along many Russian Rivers and Lakes. Featuring a shallow draught, they ranged from 30 to 50 feet long. The used a single Center Mast (although variations are known to feature a smaller Rear Mast). The Baidak used a simple triangular Main sail. Earlier versions of The Baidak were also human (or Oar powered) powered. Capable of transporting a moderate amount of cargo, The Baidak was pressed into service by Cossack Forces on The Black Sea. It is unclear if Baidak's were “officially” armed. If they carried armament of a defensive nature, it was on par with the 2-pound Swivel Gun (or related miniature gun mount system). 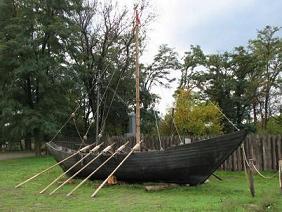