The stronghold of Baba Vida is located in Vidin, Bulgaria. It's construction is thought to have been started in 1080. A possible Roman Fort or Watchtower may have originally been constructed on the site in antiquity. The castle is surrounded by a Moated defense system (but is not a true Water Castle). The 4 defensive Towers are located oddly as well. 2 smaller Towers face outwards and 2 Towers were built midway along the defensive perimeter walls. The frontside of Baba Vida's defensive's are actually part of the interior structures walling. Built double thick to withstand assault and siege. Access to the castle is via a wooden and stone bridge attached to a Drawbridge and Guardhouse system.

A main defensive strongpoint to Bavaria's defensive during The Middle Ages, Basil II (Byzantium) - initiated a 8-month siege of Baba Vida. The siege ended up with the total destruction of the castle. It was rebuilt in 1369 and served as Bulgaria'a Capital for a period - under the "rule" of a self-proclaimed ""Lord" named Ivan Stratsimir. However, later that same year King Louis I (Hungary) sent a force to "evict" Ivan and exiled him to Moravia. Baba Vida was again under Royal control. In 1389, The Ottoman Empire invaded Bulagria and took Baba Vida. Returning from exile, Stratsimir made an alliance with King Sigismund and raised an army to oust The Turks. Taking Bada Vida, Ivan learned that Hunagrian-Bulgarian forces were soundly defeated at The Battle of Nicopolis. The Ottomans "allowed" Ivan to keep Baba Vida (providing he served as their Vassal).

From 1397 until the late 17th Century, Baba Vida served as a Turkish weapons arsenal and prison. By the 18th Century, it ceased being a major stronghold in Bulgarian defences.

The name "Baba Vida" has an interesting legend associated with it. Around the 10th Century, a Bulgarian King had 3 daughters. Dividing his Kingdom up between them, his oldest daughter - Vida, gained the castle. She never married. Hence, in Bulgarian "Baba" means "Grandmother" - ergo "Granny Vida" (as she was called or Grannys Castle). Renovated during the 19th/20th Centuries, Baba Vida is able to be visited by the Public. 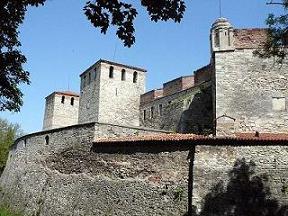