Although not traditionally part of the Aztec Warriors protective gear, several “elite” Units of Aztec soldiers wore them. Two known such Units were The Jaguars and Eagles Regiments. Both were formed of the upper-class of Aztec Warrior society. The Jaguars (a fierce jungle predatory feline), wore a solid 2-inch thick wooden helmet (hollowed and shaped). Fire hardened several times during the construction process, the helmet was carved to resemble the Cat with it's mouth open. Great detail with regards to the eyes, ears and teeth were paid.

The finished product was painted in “natural colors” (so as to more resemble the animal. The Warriors face was exposed (inside the head), and offered complete protection. A small linen cap was wore to help stabilize the headgear, as was a cloth – 2-piece chinstrap. Eagle Regiments were designed along similar lines. These Warriors took the attributes of the predator bird. A highly stylized head was made – with an open “beak”. These helmets however, consisted of an enclosed style which covered the upper head and face only. The sides of the helmet were heavy leather – which enclosed the back of the head and neck (much as a cowl). Large and copious amounts of brightly colors feathers were added. This gave The Eagle Warrior his Eagle “look”. 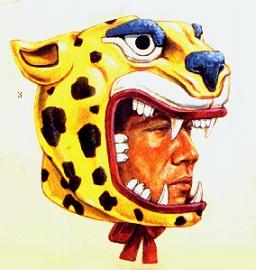 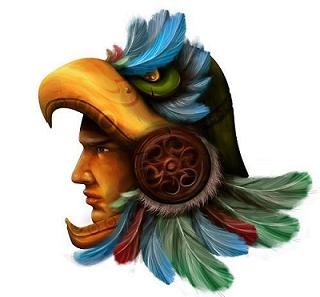