The Otomi are an ancient Mesoamerican Tribe that was absorbed into The Aztec Empire around 1000 BC. Renowned for their fierce fighting skills, The Otomi ''name'' was absorbed into The Aztec Warrior ''Ethos'' as a Regiment (similar to The Jaguar and Leopard Warriors). The Otomi Regiments were noted for wearing a complete set of Cotton (or Fabric) Armor, which (as previously discussed), was made from organic (plant) materials and interwoven into a tough, hide-like covering. Although “cloth” this Armor was remarkably strong and could withstand a Sword swipe. The Otomi Armor was made form fitting, whereas to provide maximum range of motion when a Warrior was in battle, or running.

The Otomi used feathering from birds (plumage) as a means of identifying ''proven'' Warriors in battle – as well as different colored ones, as a means of identifying Commanders and Regiments. Traditionally, The Otomi Warrior was not a user of Swords or related bladed weapons, preferring to use Spears. The type and length of which – was similar to the later Greek Sarissa, making The Otomi akij to The Hoplite Class of Warriors. 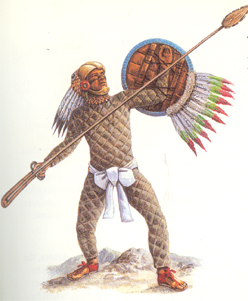