These Club/Bat-like wooden weapons were a favorite of Aztec “Melee” Troops. Various veriosns were known to exist (as chronicled by Spanish Invaders). A Traditional Bat (as in Baseball), which was cut from a single piece of wood. A shaped handle was also made for grip. Other versions featured a large ball-like head (similar to The North American Ball Club, only larger). A final version featured small obsidian edges (similar to the traditional Aztec Sword). These weapons caused immense blunt force trauma (as well as death). The name “Huitzauhqui” was derived from the Aztec God “Huitzilopchiti”. His Cult used the weapon as a sacrifice/execution method (by bashing the heads of victims). 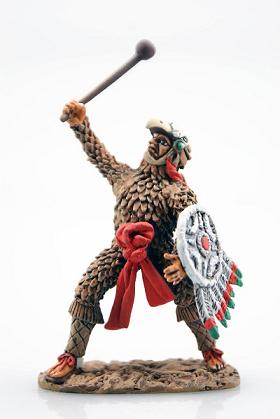