The Aztec Empire's military Forces (although primitive by European standards), were highly ingenious with regards to the types of weapons and protective devices they made and used. The Elite Forces (Jaguar and Eagle Troops), used a form of “Armor” that was very effective in combat. Akin to a type of European Gambeson/ Buff Coat variety - “Cloth Armor” was the style. A pattern of quilted linen was formed and designed to form fit the Warrior. Inside the Pattern was woven layers of plant material into a type of cross-hatched form. Layers upon layers of the thin material was then “filled” with pulverized additional (and similar) organic materials. When finished, a type of very strong “Armor” was made. These pieces were effective in stopping slashes and stabs from enemy spear and sword. They could withstand even Arrow strikes (at distance). Often plain, some varieties had embellished designs such as leopard spots and full “suits” of “war feathers”. Considered a symbol of the upper Warrior-Class, the average Melee or Line Troops seldom wore them. Courage in battle (as in the taking of living prisoners), was enough to eventually be “awarded” these pieces. Their drawback – the Spanish Matchlock! 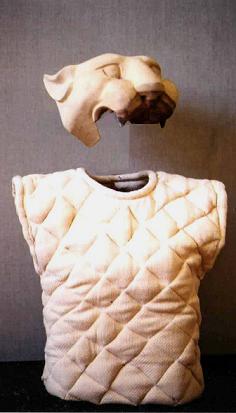