These soldier were non-Roman citizen military arm of The Roman Army through most of The Imperial and Principate Periods (30 B.C-284 A.D.). They fought alongside the traditional Legions. By the 2nd Century A.D. - Auxilia constituted almost all of Roman Cavalry nd specialized troops. Unlike most Roman Legions (who were conscripted), Auxilia were volunteer. Many were recruited from Roman Provinces. Some Roman citizens did serve in them (preferring them to the harsher life of The Legion). Slaves were not allowed to serve. By 36 B.C. thru 68 A.D. - Roman and Auxilia Units were identical with regards to uniforms and formations.

Later, Auxilia had many different types of uniform combinations and they often reflected the Region they came from. In most cases, Auxilia would serve in and around the Region they were recruited in. This practice ensured "Romanization". By the 4th Century A.D. - under Emperor Diocletian, the Roman Army underwent major changes and reforms. Many of the Legions, Cohorts and Auxilia were broken up into smaller Units and renamed. With Rome's slow decline, many of the Auxilia would go on to form the basis of many early Medieval armies. 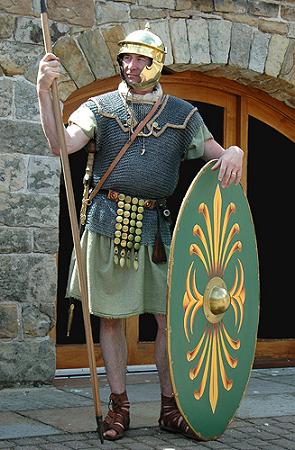