One of Australia’s first attempts at the manufacture of a fully automatic Machine Gun., The Caldwell Machine Gun was invented by Thomas Caldwell in 1915. Designed for service in World War I, this weapon was a multi-barreled, water cooled firearm which was designed to used either one or both barrels.

Using a standard British .303 jacketed round, The Caldwell could fire 500-rounds per minute. These rounds were placed in a side turning, circular Drum which belt-link feed them into the firing mechanism. Considered simpler to operate over the more popular Maxim Gun, it was also much easier to repair. The Caldwell was tripod-mounted for use as a fixed defensive/offensive weapon, or could be vehicle mounted.

A later Model was able to support a 100-round Ammunition Clip, top fed. The Caldwell had a maximum effective range of 1,300-yards. Deployed in small numbers with ANZAC Forces, it was never mass produced enough to gain any real serious popularity and after World War I, The Caldwell ceased to be used. 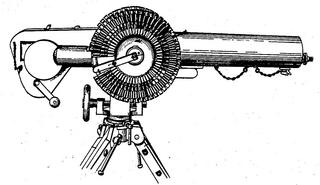