The 1st Australian Horse Volunteers – were formed in New South Wales, Australia in 1897. Initially created as a Frontier Patrol Force in the vastness of Australia, they would be quickly mustered into British Colonial Military service when The 2nd Boer War (South Africa) began in 1899. Mounted Infantry, The Regiment detachment sent numbered 150 Officers and Men. They were seconded to Major-General John French's Cavalry Division. They fought in two major engagements of That War (suffering heavy casualties). As such, The Australian Horse would serve on Garrison Duty in several large Boer Settlements (captured and occupied by The British).

Briefly reconstituted in 1901, their last engagement was The Battle of Bergendal (Belfast, South Africa). The British suffered nearly 400 casualties out of 19,000 engaged. The Battle reduced the muster of The Australian Horse so low that it was retired back to New South Wales. They were mustered out in 1901, having been given Battle Honors for their Colors (Flag). The 1st Australian Horse wore a distinctive, all Green Uniform, faced in Black. The ''Bush Hat'' was adopted, as was a variety of Cavalry weapons of The Era. 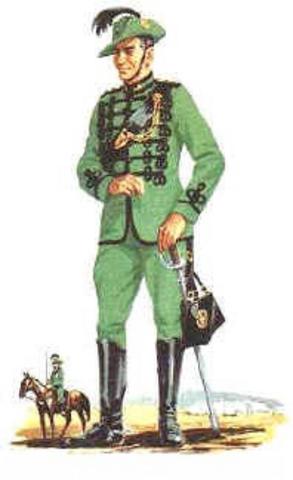