The German phrase ''Aus Der Traum'' ''It is Finished'' (or applied to ''The Dream is Over''), was a phrase which appeared throughout Nazi Germany in late 1944 until the end of World War II (1945 in Europe). The phrase was found painted and written on buildings, inoperative weapons, signage etc. The Phrase had many explanations.

First was the vaunted Germanic ''Master Race'' philosophy adopted by The Nazi Party. The Party and those German Armed Forces Officers (Reich), thoroughly indoctrinated their soldiers in the ideology that Germany could NOT be defeated. The very thought of which (if achieved), meant the total destruction of a ''German Way of Life''. In fact, such ideology was crucial to German Leader Adolf Hitler and Herman Gobbels in maintaining ''control''.

With The Allied Normandy Invasion and subsequent following victories, The German Army was starting to collapse due to lack of proper Leadership and lack of war materials. Disheartened, the average ''rank and file'' German Soldier adopted (clandestinely) the ''Auf Der Traum'' mentality. To be sure, one being found leaving such ''messages'' would be shot immediately. Even towards the end, in The City of Berlin – those surviving ''fanatics'' had orders to execute any one who exhibited such ideology. 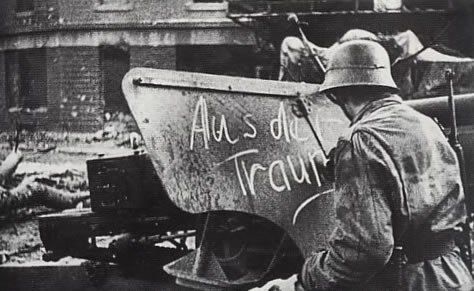