Born in 406 A.D. - very little is known of the early life of Attila. Growing up somewhere “North” of The Danube River, his Uncle was Hunnish King Rua. The Huns were possibly of Mongolian descent and were a “horse” people. A boy such as Attila was expected to do well in the saddle at 5! Skilled Bowmen and Swordsmen, King Rua's Tribe was the only one to have escaped from Roman control. Feared and respected for their skill, Rome left them alone. In gratuity, The Huns were paid 700 pounds a year in gold and were further “expected” to NOT attack Rome. . With the death of Rua, his Sons – Bleda and Attila, took the crown. Both brothers decided that they and The Huns needed a “raise” from Rome went instead on the attack against Roman far outposts throughout the Region.

The lighting quick and vicious attacks worked. Rome (by now an “old woman” with no teeth, as The Huns described them) – anted up 2,000 pounds a year in gold. Attila saw the need now to expand The Hunnish Empire to The Near East. Blede wished to stay put and grow “fat and old” on Roman gold. The two brothers naturally would become enemies. In 444 A.D. - Blede ended up assassinated (poisoned). MANY felt Attila had something to do with this. Without Blede, The Huns had no choice by to install Attila as King. Gifted of a true Warrior “ethos”, Attila was a early subscriber of “psychological warfare” as the easiest means to achieve military victory with a modicum of military effort. Wide and highly-speculative stories began to spread throughout the Region, Rome and Byzantium – of an almost “supernatural ability” with Attila. He could not be killed, if his limb was cut off it would grow back, etc. Coupled with a few “small” lighting fast (and bloody) raids, Attila's story was “set in stone”.

In 447 A.D. Attila and his Huns had destroyed thousands of acres of Balkan lands and enslaved many more thousands into slavery. Had it not been for quick thinking done by The Emperor – Constantinople would have fallen before Attila (a cattle Treaty was enacted, giving The Huns massive amounts of pasture land for their cattle and horses). Attila formed an alliance with The Vandals and The Franks in 451 A.D. The goal was to take Gaul (France). Paris fell. Moving on, “The Horde” moved through small city and village until Orleans. Roman and Visigoth Forces formed a “wall of flesh” against The Huns. The bloody Battle of Catalaunian was said to have cost Romans and Huns over 165,000 dead EACH side. It also took the life of The Emperor Theodoric I. Attila was planning on “taking” Theodoric's wife (Honoria) as his wife. This would cause a marriage “dowry” possibly as large as the entirety of Europe – to be given to Attila.

The Pope in Rome met with Attila in 452 A.D. Afterwards, Attila gave up his aspirations for “Ruler of The World” (possibly having something to do with his refusal to convert). Retiring back To “Hun Land” Attila settled down into a lifestyle very similar to his Farther Rua. He lived and drank and ate extravagantly. On his “wedding night” (to wife 8!), he would be found the next morning, dead. A blood vessel erupted in his nose and Attila The Hun, one time “Scourge of God”, was no more. Without a strong heir (Attila's Sons were weak and not as farsighted as he was), The Huns would dissolve from a strong centralized Empire, back to it's small collection of warring Tribes and Clans. 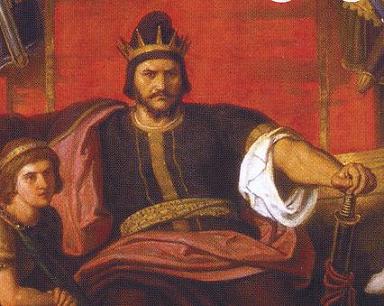