A known variation of the iconic Pelisse Jacket of Hussars fame, The Hungarian Atilla was seen in use around the 16th Century. Unlike The Pelisse, The Atilla was worn completely over the torso of the Wearer, as a matter of form. Synonymous with Hungarian Cavalry, The Atilla was adopted by Regional Nobility as a matter of fashion (regardless of the person's having Served in The Military or not). Featuring multiple rows of Metal or Brass buttons, a major difference between the two garments, was that (by and large), Braiding and Looping were not used on The Atilla. Like most Military Clothing of the "Romantic" Nature, The Atilla would fade from use by the end of the 19th Century  (although some rare use examples are known, mostly as a Ceremonial garb). 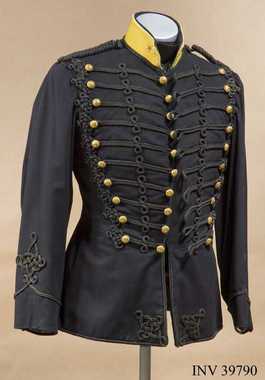