These Ancient Greek Trieme-type vessels, were specifically design for two functions. First as a “religious platform” - many sea-going religious festivals and observances were conducted on board. Secondly, as a “Diplomatic Envoy”, these vessels served to convey important diplomats to and from their missions. The two most documented from The Era was The “Paralus” and The “Salaminia”. Both were operated by The Athenian Navy in the 4th and 5th Centuries B.C. Both were estimated to be roughly 75 feet long and did feature the tradition Ramming Prow of the typical Athenian Fighting Class of ships. Featuring both human (Oar) and wind power (via a single 20 foot sail), they both also were pressed into military service at the end of their careers. Their ultimate fate was never recorded (or has yet to be found). 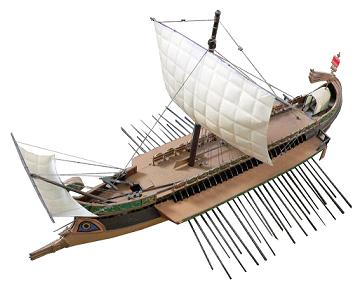