“Taken” originally from a design seen indicative to Ancient Egypt, The Kardock was akin to The Khopesh Sword. Made of Bronze, it featured a long wooden handle (with some versions a continuous piece). Unlike the Egyptian version, The Kardock was not intended to be used as a “two-handed” fighting weapon. Conversely, it featured less extended curve to the upper most portion of the blade. Tips of the blade were not as pointed (refined). Further (unlike The Khopesh) – The Kardock was double-edged on both sides. Used more as a “hacking” weapon (than a stabbing one), they were commonly used among Assyrian Cavalry (although Infantry versions were used). Ranging from 3 to almost 4 feet on length (with a 3 inch maximum width), The Kardock Sword was very effective. 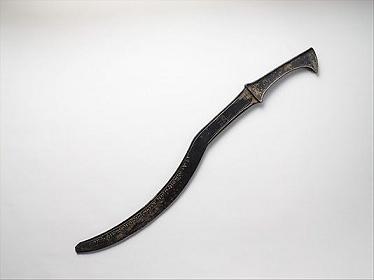