As we have seen, The Assyrians were a highly organized and effective military machine. In addition to their own developments in military tactics and weapons, they also were highly adaptive with regard to their enemies weapons when they envisioned encountered them. Assyrian Armor was effective and strong. Employing a Lamellar style, there was 2 forms of battle armor. The first, a short tunic form was a form fitting piece which covered the chest and back of it's wearer. It provided no protection to one's arms or neck, however. The second version was designed for "Specialty Troops" (such as Elite Infantry and Charioteers). These versions resembled a type of Longcoat - and we're not as form fitting. They sometimes featured sleeves and included a long "Base Skirt" that extended to the ankles. The Lamellar pieces were constructed from bronze sections (plates), which were roughly 3 to 4-inches in width and length. Rectangular in shape, the 4 point edges were often rounded. Holes were drilled into these points to allow for joining to other pieces. Connection was accomplished by metal wire or fiber. It normally took between 150 and 400 component pieces to construct a Suit. In addition to bronze, sometimes copper or a fusion composition was used. 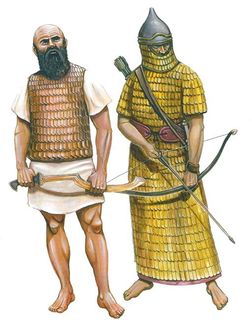