Arthur, King of The Britons

Arthur was a legendary (and much debated), British King who was Head of the mythic “Knights of The Round Table”. He and his legends figured prominently in many romantic Medieval stories. The Arthurian tales are also about his wife – Queen Guinevere, his trusted Knight and friend Lancelot, his evil son Mordred and of course the legendary magician Merlin. The Medieval Writers who composed these stories incorporated the basic ideas of their Era into their writings. Namely, Chivalry, Courtly Love, Honor and religious missions (or Quests).

The “historical” Arthur goes back well into the Celtic past. He may have fought at The Battle of Baddon Hill in 516 A.D. (which was an important victory over The Saxon Invaders). However, the Historian Gildas wrote in 540 A.D. - that the hero of the battle of one Ambrosius Aurelianus.The earliest reference to an Arthur was in the Welsh poem “Gododdin” (written in the early 600s). His name appears again in the 800s by a Writer/Historian named Nennius. His book, which was a history of The Britons, lists 12 different battles in which a mighty Celtic warrior named Arthur fought. Read more and more, it inspired a host of different poems and books featuring this “Warrior Hero”.

By 1100 A.D. Most of these “books” were regarded as actual history. When the definitive work “The History of The Kings of Britain” was written in 1135 by Geoffrey of Monmouth – he included much of these works (slightly polished up). It is easy to see how the legend and myth became a form of actual fact. French Writers of the 12th Century (romantics all), began to incorporate the Guinevere and Lancelot “angle” (based partly on the Knightly concept of “Courtly Love”). By 1470, Sir Thomas Mallory set into motion the final Arthur legend as “fact”. His book, “Morte d' Arthur”, pretty much cemented most of our Arthur history.

Incorporating The Sword in The Stone (Arthur's Kingly origins), The Lady of The Lake, his Sword Excalibur – and so on. Other Knights were named (with equally sketchy pasts), Daring deeds and quests all imparted the particular spirit of The Middle Ages. The fodder for many a young boy (who aspired to being a Knight and slaying a dragon), The Arthurian legends served their part to inspire. An actual Arthur, - we may never know. But his myth was responsible for the fabric (and future ideals) of the Late Middle Ages and Renaissance Eras 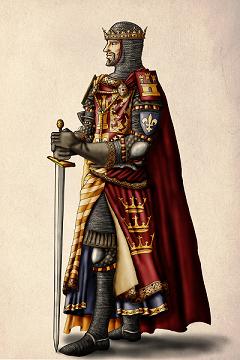