While it's name is odd, the “style” was similar to the way a Female would (without training), bend a stick or club around her back to strike. Modified for Sword Fighting (and sometimes called a “Donna”), the same principles applied. This attack was seen as a “Power Thrust” stance. The legs of The Swordsman were positioned with either the Right or Left legs positioned to provide balance and stability. The blade was placed behind the head in a swinging position, even with the rear neck. The edge portion was reversed (taking into account with the position of the blade altogether). Upon deployment, a full “swing” was employed. Direction was designed to basically decapitate an Opponent. The Woman's Guard could also be used to engage 2 to 3 Enemy Swordsmen. 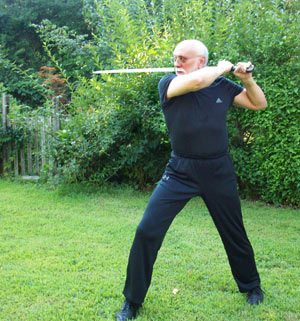