The German School of Swordmanship in the 16th Century was noted for developing many widely used combat tactics in the late Middle Ages. One such defensive tactic was The Wechsel Stance. This was a Low Guard tactic, in which a Blade could be used for low strikes – directed towards an Enemies lower legs. The Swordsman angles his legs in a shoulder length stance, which can face either left or right (depending on the strike). The Sword Arm (strong), is placed high on the hilt (handle). This steadies and allows for direction of the strike.

The weaker arm is used to move the blade into the direction intended. The blade tip is positioned downward, as to touch the ground. The strike is brought up with the strong arm to hit either the shins or front of the thigh of an Enemy. Much conjecture is given to The Wechsel Strike. It could be used to lift up dirt or sand as a means of ''blinding'' or impairing the vision of an attacker as well. Such tactics would be considered ''ungentlemanly'' in combat (but was no doubt used nonetheless). 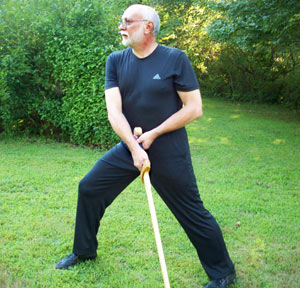