Another in The Medieval School of German Swordsmanship was defensive stance known as The Tutta. Often seen as a ‘’Low Ready’’ position, the use of such was also a “guard’’. In application, The Swordsman would position his strong leg rearward, with his weak or left leg somewhat hyper-extended. This allowed to give a stance for a lunge at his Opponent. The positioning of one’s blade required for the strong hand to grip the blade outward, with the weak hand acting as a stabilizer. The face of the blade was positioned flat side out. The position allowed a Swordsman to quickly bring his blade up to a variety of additional front or side strikes. 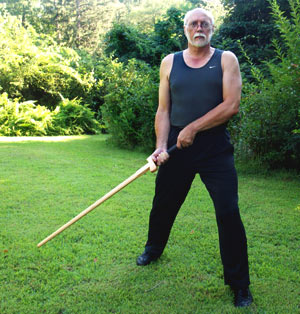