Part of a Castle's Defenses, that were in part a component of "The Murder Hole" Family of defense measures, Arrow Slits arose from the need to provide attack capabilities within a Castle's Fortified Tower System. They were vertical apertures cut into the stone Towers that were accessed via the normal flooring and stairways built into such. Also referred to as "Loop Holes" and "Arrow Loops", The Slit typically supported the Bow and Arrow of a single Archer. The aperture was cut at an oblique angle. This afforded the Archer the ability to "angle" his aimed shots at both moving and stationary targets.

Due to the small openings counter fire was nearly impossible for an Enemy. The Archer was also immune from attack. Originally, Arrows Slits were not indicative of The Middle Ages. Ancient Rome had used a form in the 2nd Century AD. They were used to support Scorpion siege weapons at The Siege of Syracuse in 212 BC. The European version appeared with Norman Military architecture around the 11th Century. Possibly one of the first known Castles to incorporate Arrow Slits was Chateau de Gisors in France.

Normally for optimum use, and Arrow Slit was 6-feet in length and 4-inches in width. This measurement afforded both a standing or kneeling firing position. A common myth is the overall shape of the Arrow Slit. The design of using a "Cross shape" (which could provide not only a traversing firing angle, but a sweeping left to right firing field), were not in common usage until the advent of gunpowder. Primitive firearms were seen in use with this type of Slit, which wasaw renamed a "Firing Port". 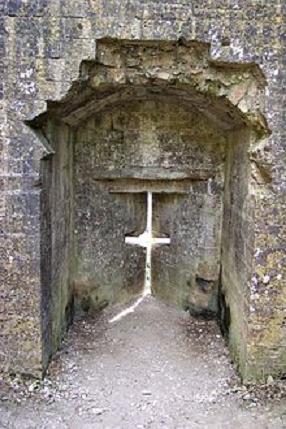