The Arquebus was an early muzzle loading firearm, first seen in Europe in the early 15th Century. Known as "The Hook Gun" (so named for the shape of it's stock end), it was different from the early Hand Cannon. It featured a "matchlock" firing action and was a smoothbore piece (meaning no barrel rifling). It also featured a more ""traditional" rifle shape (which made in light and easier to carry). Gone was the overly large "cannon barrel". Often confused with version requiring a Firing Fork (or related stabilizing device). The Arquebus was held and fired as a modern rifle would be. It was a low velocity weapon, which made it effective again Chain Mail and light armor. However against heavy plated armor (still very much in use at the time), it could only knock over an opponent. Still the ""target" may be a candidate for blunt force trauma! Often when new armor was made, Armorers started firing a test round into them to see how they fared. This caused armor to be made with (3 quarter plate rule), to counter this new weapon.

The weapons matchlock design was a feature which had a slow match clamped to a lowering lever. The lever dropped the slow match on the primer pan. This would ignite the powder in the barrel and sent it's round out to it's intended target. Stocks were made of oak or similar hard wood. They fired a wide variety of different type of caliber (since no real standardized shot had been implemented yet). Still many surviving rifles are in the .50 to .69 caliber range (by modern standards). Major drawbacks to the Arquebus were weather (rain and damp would effect the powder, rendering them useless). Next, against Archers - they still had problems. A skilled Archer could still fire more arrows that an Arquebuser could fire bullets. Crossbowmen were now fair game, because it still took longer to ""rack and load" a bolt, than to fire the Arquebus. In addition, training made them more desirable. A good Archer took a life time of training. An Arquebuser took about a week. The weapon was relatively cheaper to make (and quicker) than a Bow and Arrow. The Arquebus disappeared in favor of the next innovation in firearms - The Wheel Lock. 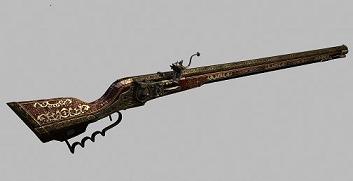