Arpad is best known for his establishment of The Kingdom of Hungary (and it's first reigning Dynasty). Born in 850 A.D. - He was the Son of a Magyar Chieftain and Prince. Arpad spent most of his time near The Black Sea, learning the way of the Magyar Warrior (a skill that would come into play in later life). His father's Tribe was not particularly wealthy or strong. Arpad gathered up his fathers (and other disparate ones) – into one Clan. They moved and settled into Pannonia (a Roman Provence). Pannonia was populated by Slav's and other Carpathian Tribes. They took it not too kindly to Arpad and his Tribe crossing into their territories. However, Arpad and his new Tribe could fight. They defeated The Bulgarians at The Battle of Alpar. It was said Arpad killed the Chieftain Almos in battle and allowed his “spirit” to enter Arpad. This more or less cemented his rule of his now greatly expanded peoples and territory. Uniting his peoples, Arpad needed recognition. He sent Ambassadors to the Frankish King Louis The Child (and requested such). When Louis refused, Arpad massed his Magyars yet again. They invaded Bavaria in 901 A.D. Excellent mounted Archers, they soon were nicknamed “The Scourge of God”. Expanding his Kingdom, Pannonia (now Hungary), was firmly establish (albeit never formally – but it would eventually be “blessed” by Rome). Having many heirs (Sons), to carry on his bloodline, Arpad died in 907 A.D. The Arpad Dynasty would continue until 1301. 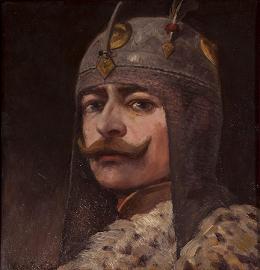