Rank (or the establishment of a Command structure) is as old as “The Art of War”. By the time of The American Civil War, rank insignia had been in used for only 50 years prior. Based on the English system (in some part), rank insignia was used to identify (especially among Enlisted personnel) – a solid Command structure. Made of colored cloth (denoting Branch) – they were affixed to the uniform coat sleeve. The insignia was shaped in a “V” design. Ranking was rather simple in identification. Privates had no rank identifier. A Corporal was identified as 2 stripes and a Sergeant with 3 stripes. A First Sergeant was identified with 3 stripes and an affixed diamond “lozenge” (placed over the top stripe - centered). The highest rank achieved in Civil War Armies (on both sides) was The Sergeant-Major. He was identified by 3 stripes (down) with 3 stripes (above) in a connected semi-circle. A variety of different designs were incorporated for positions such as Quartermaster Sergeant, Bugler, Saddler Sergeant, etc. This design pattern would remain until 1900 when the “V” design was inverted (turned upside down). Although modified to reflect the many different ranks that have evolved since 1861 – the design has remained unchanged.

Officers in The Federal Army had (like their Enlisted men) – been using a standardized rank insignia for only 50 years prior as well. Theirs, known as “Shoulder Epaulettes” (sometime referred to as Shoulder Straps) - were derived from The French. A heavy cloth and felt horizontal board was worn over the far end of the shoulder (affixed to the uniform itself). In The Civil War, a colored backing was shown to reflect the particular Branch the Officer belonged to). Dark Blue for Infantry Officers, Red for Artillery, Green for Medical, Yellow for Cavalry, etc. Towards the end of The War, Infantry Officers adopted the traditional “Light Blue” (keeping the Dark Blue for the General Officer Ranks. The particular rank insignia (Lieutenant, Captain, etc) – was affixed to each end of the shoulder board. This style was adopted by The US Navy as well. Shoulder Boards are still the standard identifier for US Military Officers to this day.

The Confederate Army had a MUCH more different style to identify it's officers. Field Officers used “Rank Braid” attached to the lower sleeves of their uniform coats. These braiding were normally in the color of their particular branch. 1 set of braid denoted Lieutenant and so forth (with 4 braids reserved for General Officers). The design was based in part on French designs. In addition to sleeve braids, Confederate Officers employed “Collar Rank”. Series of bars or stars were affixed to the high collars of their uniforms. These could be in the same color as their branch (but more commonly gold colored). 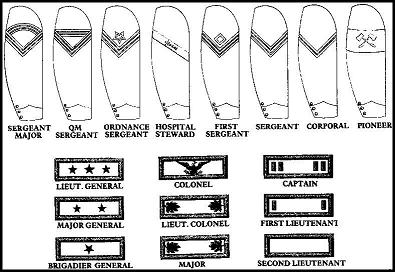 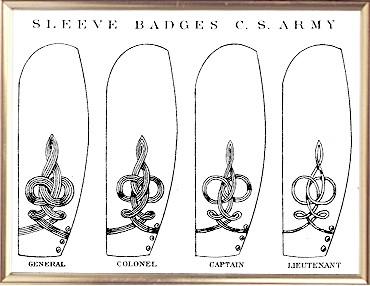