The Royal Arms of England's King Henry II, were in use by Him between the years 1133 and 1189 AD (although His Kingship officially began in 1154 AD). Seen as the first of The ''Plantagenet Kings'', Henry II was noted for His attempts to regain English control over many ''English Territories'' in southern France (Brittany) as well as His attempts to subvert control over Catholic Canon Law. Both of which, would serve as the impetus for the future Hundred Year War and the eventual dissolution of Catholicism in England in favor of Anglicanism. Henry II used two different Arms as His Royal identity. The first, was a Red Field, upon which was placed a Golden Lion (the symbol of Kingship), in a rampant (raised) pose. Later, before His death in 1189 AD – Twin Golden Lions in reclined or Passant pose, also on a Red Field was incorporated. The overall design would be used (and still is) on the current Royal Arms of England (in quadrant). 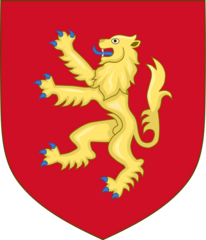 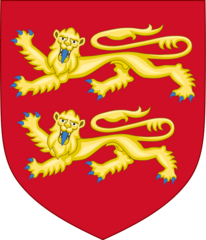