Although the idea of “armoring” a Locomotive was not an American Civil War “invention”, it was certainly refined during The War. Locomotives had become increasingly important to the transportation needs of America (and elsewhere). With The War, came their use logistically with the transportation of supplies and men to battlefields and theaters of operation (another “first”). Similarly, both side took steps to disrupt Locomotive transportation. Artillery (being the main choice), was deployed so as to either damage or destroy the Steam Engine or likewise to it's track. Small arms fire was not as dangerous (but was harassing nonetheless). Both sides worked on several solutions.

The addition of an Armored Car was developed. Built as a “normal” wooden and steel framed train car, The Armored Car was reinforced with 2 to 3-inch thick steel plating. With all “comforts” removed from the inside of the car. Small to medium artillery could be installed to protect the train. Often large multi-car components were made to provide an almost “Broadside” firing ability. Oddly, Union Armored Trains placed their cars at the FRONT of the Steam Engine, while Southern Forces tended to place them in lieu of the Cabose (or rear). Sometimes, when cannon were not available, an entire Company of Riflemen could be “safely” deployed. Armor Train pioneering would continue after the war, with specially made “Cars” used to transport Gold and Silver Reserves, as well as important Government figures. 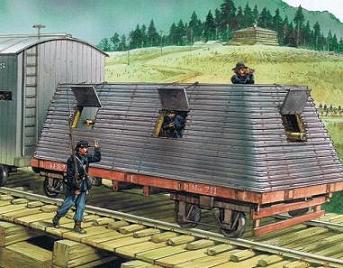