The Armilla was a Roman military award given to soldiers who displayed conspicuous gallantry in combat. Officers and non-Roman citizens were not authorized to earn this award. Auxilia (non-Roman soldiers), as a unit whole could be given the award Armillata ("Bracelets Awarded") - even though actual bracelets were not given. A decoration may have been installed on the Auxilia's Signifer. The award could be bronze, silver or gold (with gold being the highest of the award). They were not worn with the everyday uniform - but were worn during parades and for special ceremony. The Armilla could not be awarded to a soldier whose bravery resulted in his personal death.

Often when a soldier died (hopefully after his 25 years of service), the image of his Armilla would be carved into his cenotaph (tombstone). The idea for the award was probably borrowed from Roman encounters with the Celtic Tribes. During the Roman invasion, they noted that many warriors wore "gold bracelets and necklaces", who were "fierce in combat". Assuming the jewelry was a form of award - the Romans invented the similar Armilla. The ends of the award were often fashioned into the heads of a snake. The soldiers name was not inscribed on the decoration. 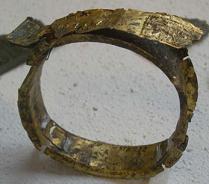