The Ard was a form of early Middle Aged Plough, used for tilling fields for crop planting. The Ard was seen as one of the first examples of ''controlled'' Ploughs. The Ard, first seen around the 8th Century AD and in used up until the 13th Century by some Nations, was normally made of heavy shaved (hand cut), wood. It's overall usage allowed for either animals (oxen) or (most often) – humans to pull the Plough. The Ard featured a long, curved hook-like extension which could be placed into fields. A simple yoke-style Main Bar (pole), was attached and ran rearward to a yoke-like harness. This was then pulled in a straight line, while The Ploughman crudely ''steered'' the wooded prong gouging the dirt. Even with the advent of Iron Ploughs and sharper cutting blades, many ''simple'' Farmers still used The Ard for it's ease in creaton and ultimate repair (not needing a Blacksmith). 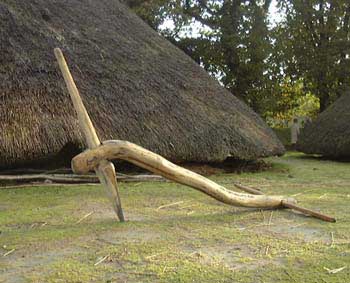