Dated to 82 AD, The Triumphal (Honorific) Arch of Titus was built and dedicated to Emperor Domitian to honor his Brother, Titus – in The City of Rome. The Arch commemorates Titus (and to a lessor degree His Father, Vespasian) – and his Victory over The Jews during The First Jewish War (Judaean Revolt 73 AD). The interior of The Arch features reliefs of Titus' entrance into Jerusalem, the sacking of Herod's Temple – as well as a depiction of The Jewish religious symbol The Menorah.

The building of Triumphal Arches were seen as the ultimate honor for a Conquering General of Emperor. Built throughout Rome, the iconic stone structures were duplicated throughout The Roman Empire (Provinces) – seen as a symbol of ''true'' Rome.

Constructed by famed Roman Architect Rabirius, The Arch is made of Marble. The many carved inscriptions were one plated in Bronze and Gold (long since stolen or removed). The Arch is 50-feet in height with a width of 45-feet. The actual inner Arch is 30-feet in width. The addition of the Column Facades on the outside of The Arch are dated to a 19th Century Restoration.

Surviving through disasters both man-made and natural, The Arch of Titus was part of The Medieval perimeter Walling of Rome (13th Century AD). Later, several Popes used The Arch as a ceremonial Site for Church Ritual (15th Century). The Middle Ages Walls long removed and repurposed.

The Arch of Titus is also credited for influencing the construction in 1806 of The French City of Paris ''Arch of Triumph''. 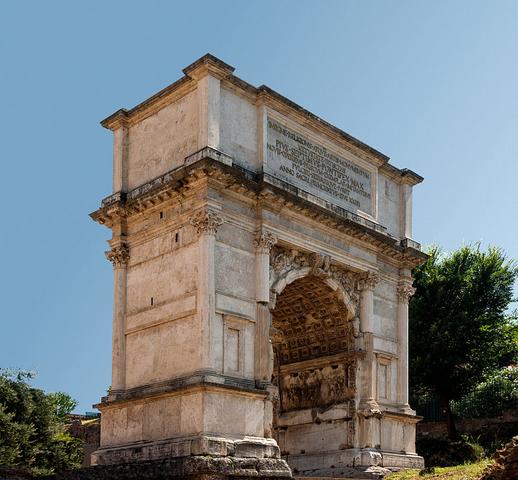