Built in 203 AD by Roman Emperor Septimius Severus, The ''Arch'' which bears His name was also (in part) dedicated to His two Sons and their participation (as well as a celebration) of The Roman victory during The Parthian Wars of (193 AD to 199 AD). Located in Rome on The Forum, it features carvings of the battle of that War.

Later when Severus died, His Sons became Co-Emperors (and somewhat unpopular at that). His first Son had His Brother assassinated (so He could reign supreme). Conversely, He had all mention of His ''late'' Brother ''removed'' from all monuments and alike throughout Rome. The Arch was not spared.

Thru the Centuries, The Arch suffered natural erosion cause by hill sentiments nearly. At one point in the early Middle Ages, it was said – The Arch was almost buried up to it's top. It was later uncovered and incorporated into a Church (being built in 1199 AD). This construction actually ''saved'' The Arch for Centuries. When The Church was later demolished, The Arch was saved from due to it's excellent condition.

The Arch of Severus had been used as a painting subject as early as the 18th Century and photographed well into the 21st Century, as one of the few surviving Imperial Arches still remaining in such condition. The Arch is 55-feet in height and 45-feet in width. Made of carved Marble, it features a Central Arch and twin smaller Arches (flanking). (8) Panels of carvings are present.

Contemporary account also stated that the top of The Arch featured a Statue of The Emperor and His two Sons (possibly in the uniform of a Roman General). A Quadriga (4 Horse horse drawn) Chariot was also said to have graced it top. All are now long gone. 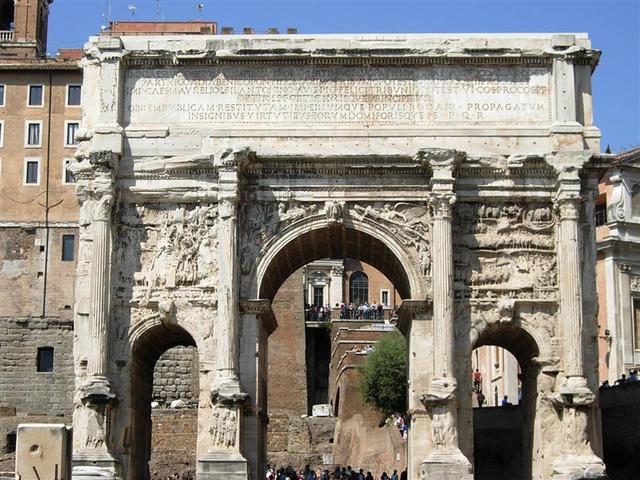