Located in The City of Rome, in The Forum (facing The Palatine Hill) – The Arch of Emperor Constantine was constructed and dedicated in 315 AD. It was built to honor Emperor Constantine and his victory at The Battle of Milvian Bridge (312 AD). Imposing over The ''Triumphal Way'' (Via Triumphalis) – this road was the primary route taken by all Roman Generals when returning from a ''victorious'' War.

45-feet in height with a width of 30-feet. Unlike a traditional Arch which featured a single point of entrance, The Arch of Constantine has not only this principle feature, but two smaller supportive entrances. Made of Marble and Roman Brick, it was decorated with reliefs of not only The Battle of Milvian, but the ''triumphs'' of several other earlier Roman Emperors.

Whenever The Emperor Constantine returned to Rome, His Arch was the site of His ''welcoming home'', with ''great celebrations and dedications''.

One of the most visited and best preserved examples of Roman ''Arch Construction'' with regards to the many Frescoes and related carvings, The Arch of Constantine was also a popular subject for 18th and 19th Century Painters (featured in many Paintings). 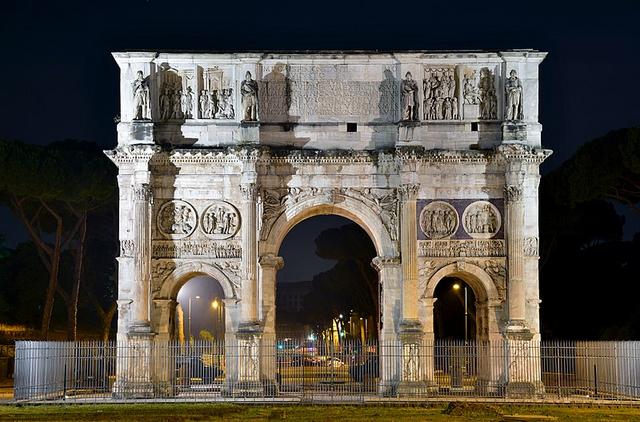