Debated by many Historians as to the exact meaning of the word - “Arbelos”, it had come to identify two things. First, a “type” of Ancient Roman Gladiator (Fighter), who specialized in killing with a device known as the “Arbelos Knife”. The second, is the name of the knife itself. Whichever version you prefer, the weapon was seen over 2,000 years ago (mostly in Roman Arena Tournaments). The Arbelos Knife was a large (10 to 15-inch) flattened copper or iron shaped blade (similar to an Axe Head). The tips of the dead were more tapered and flared to a point. The body of the blade tapered down into a handle of sorts. This would be wrapped in leather or an actual wooded or bone handle attachment could be added. In some variations (Roman pottery and Mosaics), The Arbelos is shown as a type of Pole Arm weapon (at 6 feet long).

The entirety of the blade front was sharped (as were the tapered “hook” ends). It was considered a close quarters weapon for slashing and ripping of tendons (to slow down an opponent for the coupe de grace). It is speculated (although postulated more by Hollywood), that The Arbelos was mounted on Poles and swung in various movements and forms. Some “fantasy pieces” even have dual headed Arbelos. Surviving versions found when compared to skeletal remains of “known” Gladiators killed in combat, tell The Arbelos (knife or Pole Arm), grisly tale. Another popular version of The Arbelos “uses” has been portrayed as the weapon being fitted into a long wooded or iron “sleeve”. A specific cutting and slashing technique was developed by another “named” Gladiatorial fighting group called “Scissores” (or “those who cut and slash”). 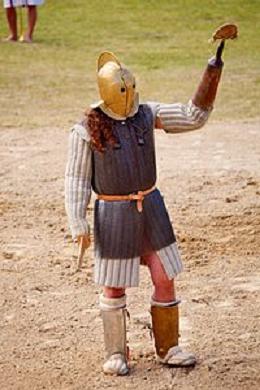