This was the most senior Signifer of The Roman Army and responsible for carrying The Aquila (or The Eagle). The custom of The Eagle goes back to 106 B.C.  Prior to an Eagle, Roman used other animal symbols (boar, wolf, bear and horse). The Eagle Standard was the most important part of The Legion. Losing it was the ultimate disgrace (and could even lead to death as a punishment). The Eagle was normally made of bronze or iron and often had an attached wreath encircling it and was mounted on a 6 to 8 foot wooden pole.

Although most Eagles featured outstretched wings some versions were made with wing raised. Often held in place by a metal wreath of crown, this symbolized a veteran combat unit. The position of Aquilifer was extremely important and his rank was just below that of Centurion. Contrary to misconception, the Aquilifer did not wear the "animal hide" uniform. More accurately, the Aquilifer wore a standard helmet or none at all. The theory behind the "no helmet" tradition was again early psychological warfare. By showing an enemy his barehead, he established his lack of fear in combat. Also, unlike other Signifer's, the Aquilfer carried a sword as well as the Parma Shield. The current tradition of using an Eagle on a Flagpole or Flagstaff evolved from the Roman Aquilfer. 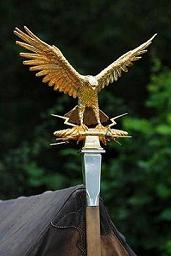