As we have discussed with The Roman Military Title and Position of Aqulifer, this Soldier had the great responsible of bearing the symbol of a Roman Army (or Legion), before it in battle. The symbol chosen by Rome to represent itself was The Eagle. Prior to this, in Rome's Kingdom Period, a cross-section of animals were used to represent Rome. These were traditionally, The Horse, The Eagle, The Wolf and The Boar. All were adopted for various reasons – but all represented some form of “martial strength”. By The 1st Century BC, animals were by and large discontinued with the exception of The Eagle (which was seen as “Regal” and “Imperial” It would remain as such for the remaining History of Rome. Although the “official” symbol (later) of  The Roman People and (later) The Emperor, both The Dragon and Serpent were added to some Roman Legions (primarily as identifiers for Cavalry).

Various designs had been created throughout Rome, with no set pattern. Some Aquila had Eagles with “folded” wings, other with wings fully extended. Most bore a cloth Banner with the numerical identifier of the particular Legion. In some cases, even this was made of brass or other metal.

Only (1) Aquila was presented to each primary Legion. It was the greatest of dishonored if The Aquila fell into Enemy hands, and great efforts were taken to prevent this. Although most erroneously assign the first “loss” of an Aquila (several, in fact) – with the 9th Century BC Battle of Teutoburg Forrest (Germania), (7) were lost in various Battles and engagements prior. Conversely, (7) more were lost between 66AD and 378AD (with only one recaptured).

The use of The Eagle would continue into The Eastern Empire. These were slowly adapted to reflect a “Double Headed” pattern, which would also be adopted into The “Holy Roman” Imperial motiff for many more Centuries. Additionally, many Nations use an Eagle Top Cap for their Flag Poles. This practice is directly related to The Ancient Roman usage. 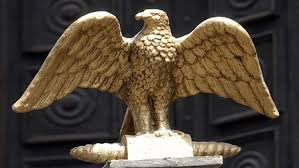