''Apostolic Poverty'' is an Ancient Church condition, practiced by The Clergy – by which no material or ''earthly'' wealth can be gathered or saved. Much as Jesus Christ lived a life of such ''poverty'', so too should His Ministers. As such, as part of a Candidate to a Religious Vocation (Man or Woman) – they must take a vow of ''Apostolic Poverty''.

While their very basic ''Human needs'' were met (basic clothing, food and shelter), Religious owned no personal property. They were encouraged to give ''all away'' to the poor and those in need. The Church Hierarchy of the 13th Century went as far as to decry Apostolic Poverty as ''heresy''. This was seen as most in The Hierarchy were seen as ''Princes and Kings'' within The Church and as such, needed to live a ''modest life'' as was befitting any other ''Royalty''. Although repealed in the 15th Century AD, many Bishops and Cardinals (even Popes), lived such lives of ''excess''.

Despite this, and the much later Reformation within The Catholic Church that was meant to restore and enforce Apostolic Poverty, a balance is currently used. While not allowed to own personal property of monetary value, many still are required to maintain such articles in the furtherance of their Vocations (Cellphones, Vehicles, Computers etc.) A Religious does not own these items, as they are ''Church Property''. They and any other items of wealth remain within The Parish when a Religious leaves or is transferred. 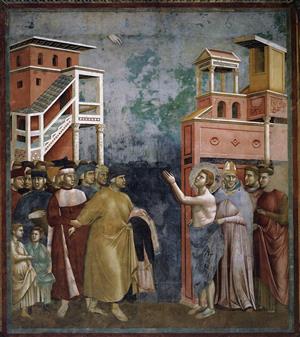