As we have seen, ''Uncle Tom's Cabin'' was an American Abolitionist Movement Novel written by Harriet Beecher Stowe. It showed the cruel treatment of African-American slaves in The South just prior to The American Civil War. The Book, which was a Worldwide ''best seller'' for it's day, was NOT received well by The South. In fact, to counter what they perceived to be an ''unfair portrayal'' – countered with their own form of ''propaganda''. These were the so-called ''Anti-Tom'' Books (a modern term).

The various Novels and pamphlets published between 1852 and 1858, portrayed Slavery in a ''moral light''. It showed that they were far better treated than they really were and in most cases showed the religious and political ''benefits'' of maintaining the ''Peculiar Institution''. Southerns were shown as ''kind Masters'', often treated maliciously by ''Northern Agitators and Rebellious Slaves''.

Many of The Anti-Tom Books were obviously not available in The North – who saw them as a futile and misguided attempt at justifying Slavery. Still, over 40,000 such copies of the various books were made available in The South until the start of The War. 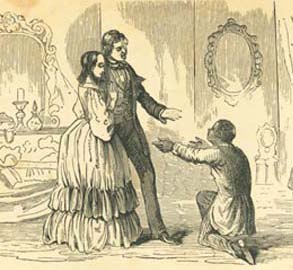