So named for it's very unusual handle extension (Pommel), and it's resemblance to the device – these ancient weapons are dated from The Late Bronze Age (600-500 B.C.) they too seem to have developed in Northern Italy and their designs spread forward (as a result of Trade and of course, conquest). Often seen as an early template for the Greek Xiphos Sword, these Bronze weapons were also a one-piece component. More detail was placed into the construction (engraving) of the Handle (as stated). Attempts to create a form of “Cross Hilt” are seen by this time. The unusual rear Handle “curling” of The Antenna Sword is another “trademark” of the Model. It is speculated that these “up twists” of metal (used in concert with the Bronze extension) – made have allowed The Antenna Sword to be used to cause massive blunt force trauma to one's enemy. 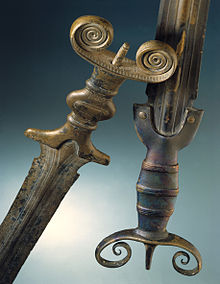