Some considered The Andabatae Fighter more of a “comic” relief that a true fighter. Often, an accused criminal may be “pressed” into the role. The helmet used was identical to The Murmillo, only it featured a completely enclosed face visor with NO openings!.Given heavy linen cloth (binded up the arm instead of The Manica), The Andabatae was afforded the long Spatha Sword (and Scutum Shield). His “life expectancy”” was not given long, and he was mostly used for “laughs”! 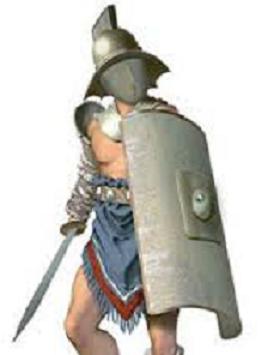