The "Anaconda Plan" was an envelopment tactic devised by US Army Commanding General Winfield Scott in 1861. At the start of The American Civil War, US President Abraham Lincoln approached Scott to come up with a plan to quickly defeat the recently seceded Confederate States. His plan was designed to encircle The American South from both land and sea, slowly "squeezing" The Region (as the predatory reptile), into submission. The land operations called for 80,000 men (divided into Corps), to move in an unbroken offensive line, from Virginia, all the way through to the Southwestern States of Kansas and Mississippi. The Commands would move downward, exploiting any and all Rivers and Tributaries.

The Naval Forces would form a "fluid line" which would stop any and all commerce and trade with The South, from off the Eastern Seaboard  (Virginia), all the way to Florida, and around the Gulf of Mexico. The immediate problems with Scott's plan was two fold. at the start of The War, The US Army numbered only 16,000. Although Lincoln issued a Proclamation for 75,000 Volunteers (he got 120,000), these were poorly equipped and trained men. In terms of Scott's plan for exploiting Rivers and Inlets, The US Navy (at the time), did not have these kinds of vessels. It did however spur the rapid development of Ironclads and Armored Paddle Wheel ships (idea for this mission).

The Union Navy only numbered slightly over 100 vessels which made maintaining a Blockade problematic. The Confederacy quickly employed "Blockade Runners" to circumnavigate this obstacle. However, by mid 1862, The North's Naval assets grew enough to serious impede this counter obstacle. Although the land portion of Scott's plan was largely overlooked, it was modified in part, as The primary maneuver of many Union Generals. The "splitting " of The South thru Vicksburg, Mississippi and the taking of New Orleans and Mobile, Alabama - were examples of Scott's Plan. 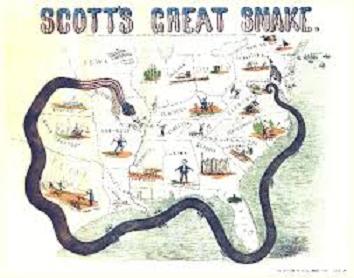