“Clothing Maketh The Man” was as true for a standard Civil War soldier from either North or South. Heavy cloth and wool were standard materials for most civilian clothing in the mid-19th Century. Standardized uniforms in The Federal Army were no exception. At the start of The War, many States (both North and South), had City, County and State Militias. Often patterning their uniforms on European models – many were “flashy” and probably NOT battlefield survivable (in the long term sense). For Federal issue, a plain nondescript blue coat was issued. Brass buttons (as little as 4 and as many as 8 in some cases), adorned the front. Branch identifying “piping” was initially used sporadically. Trousers, often in a “Kersey Blue” was issued next. Held in place with plain blue or white suspenders, the “Basic uniform” was completed with the appropriate headgear. Many Units still incorporated some form of “self-identity” with regards to making their uniforms “different” from others.

A common problem with Army uniforms of The Era was sizing. A “one size fits all” theory was often practiced (with very uncomfortable results for the poor Recruit). Uniforms were also NOT designed for different weather conditions. Often a wool coat was as horrible in the heat of Virginia as was getting shot by the enemy! Although Army issued “additions” (Great Coat for winter, Vests, etc), were made (as well as “new” developments), a soldier had to adapt as best he could (or purchase his own components). Confederate soldiers fared far worst than their Northern foes. Initially, bright and colorful uniforms were the “mark of the day”. The “basic initial issue” of the Rebel soldier in the early days of The War was a “Cadet Gray” uniform, very similar to his Yankee Cousin. Very quickly (due to the Union Naval Blockade), clothing (and dyes used to color them) – became scare. A homemade uniform very quickly became “the norm”. Known as “The Butternut” (for the tan or sometimes dark brown color made when using a variety of homemade dyes from rather unique sources – such as Bean Nut), a tan and brown variety became used.

This (coupled with the often frowned upon practice of taking and using captured Union uniform pieces) – created a very “confusing” picture of a charging group of Rebel soldiers. In many cases, plain civilian clothing was used (and mixed) as well. Officers of both Union and Confederate Armies (while they had an “”official” set of regulations) – often “self designed” or modified their uniforms. Mostly, an Officer had to procure their own set of uniforms (again based on regulations). Both sides developed some elaborate styles. Many Officers tended to lean towards the European “Hussar” style of uniform. Although, the standard “Frock Coat” was the predominate style of wear, often as an Officer was promoted up through the ranks, so was his “style” in uniform wear. Many of the more famous and non-pretentious Field Commanders on both sides had the habit of wearing a simple Enlisted Coat (albeit modified for rank). Confederate Officers no doubt had “the vote” for some of the more “dashing and flamboyant” uniform types. 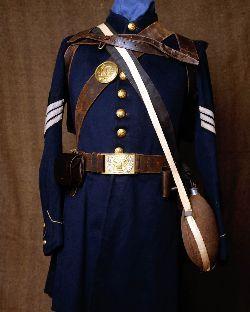 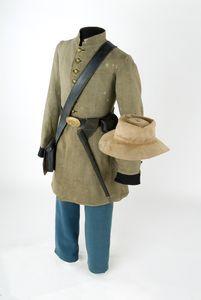