This flag was based on a Benjamin Franklin 1751 political cartoon. The “Broken Snake” was meant to represent The 13 Colonies of America. Meant to show that while “divided” The Colonies could not stand up against England. Made on a white field, the Broken Snake could possibly have been in color (or simply sewn black). Below The Snake was the phrase “JOIN OR DIE”. The flag was known to have been carried early in The War (and is often confused with The Gaddsen Flag). 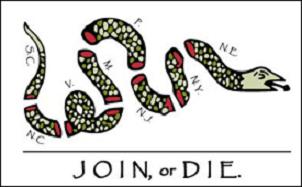