At the beginning of The American Revolution (1775), The ''American Army'' was a collection of Colonial Militias. Under command of General George Washington, He would ''create'' an Army (while sparse on equipment), was able to eventually defeat one of the most powerful Standing Armies in The World at The Time – Great Britain. As was the course of ''Battlefield Tactics'' in that Era, which Infantry Formations were crucial to winning, so too was the need to maintain effective Artillery (a tool of War just starting to come into ''it's own''). Great Britain could field hundreds – America could not.

With The Colony of Massachusetts providing the largest contingent of Artillery, Washington formed The Continental Artillery Regiment (1775). With additions from other (smaller) Colonies, a Force of (12) Companies (Batteries) equaling roughly 50-guns of various poundage, The American Army fielded it's first ''Artillery Corps.''. Used sparingly – against fortifications (siege) and the occasional ''large scale'' engagement such The Battle of Trenton (New Jersey, 1776) – The Continental Artillery Regiment was as crucial to The American War Effort as was the eventual Military Support of France later. However, by 1777, the inability to replace worn barrels (and of course trained Artillerymen), found The Regiment downgraded to only (4) Companies (which were dispersed through The Army). As such, The Continental Regiment ceased that year.

The Regiment wore the chosen Blue Uniform Coat and Buff Trousers, but their Uniform Trim was in Red (which would become the official Branch Color of American Artillery thereafter). As Guns were varied, no standard issue was used – but both 3 and 6-pounder Models were deployed (as were a few Coehorn Mortars, captured from The British at Bunker Hill in 1775. 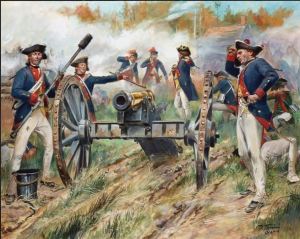