Also called “The Hawk”, the initial design for this weapon came from the “standard” weapon of many Native American Tribesmen. Considered a general purpose tool (work and war), Tomahawks were a staple for many Colonials in The New World (16th to 18th Century). Designed to be either used as a hacking and slashing weapon, The Tomahawk was best suited as a throwing/striking entrance. Many Specialized Military Units used variations of The Tomahawk. Variations were issued in The British Royal Navy as an anti-boarding weapon. Handles were made of many different types of regional hardwood (roughly set in length at 2 feet). Heads were also designed of steel and iron (even bronze). Double edged, heads seldom extended beyond 4 inches. Some variations were flanged (akin to the Viking Dane Axe). Some versions featured a flattened War Hammer variant at the axe head's opposite point. Still others (in Native American culture), could be used as a “Peace Pipe”- which showed the paradox of “War and Peace”. Variations of The Tomahawk would continue to be created and used by many Nations and can still be found in manufacture even today. 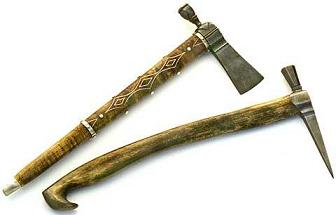