With their “birth” said to have been at Tun Tavern in Philadelphia, Pennsylvania – The American Continental Marines were the evolutionary first step into the Modern US Marine Corps. Their development was from the need to create a “Seaborne” Infantry Force which could support early American Naval Operations. Seen as both a “Landing Force” and Ship Defense contingent, the early Continental Marines were patterned after Great Britain’ similar (and at the time, 100 year old) Service.

Originally, it was thought to recruit several Regiments from the existing Continental Army under General George Washington. However, due to The British Offensive in Nova Scotia, Forces needed could not be spared. Marine Forces were recruited solely from Philadelphia and New York. In the 8 years of it’s existence, an estimated 2,000-Marines were recruited. The majority of these men had served in both The Merchant and Military Navies of many Nations.

To single out The Continental Marines from other Units in The American Army, they were given Green Uniforms with White Facings. High Collars made of leathers (a modified Gorget) were worm to protect their necks from sword slashes and bayonet thrusts. It was from this uniform component that the moniker “Leathernecks” was created.

Between their creation and eventual disbandment from Active Service, The Continental Marines fought 10 major Naval Battles and close to 30 engagements. In 1785, both they and The US Navy were disbanded due to the need of not establishing a “Standing Army”. However as America began to see the need for protection of it’s assets abroad and on The Seas, The US Congress authorized the re-establishment of a “Marine Corps” (and Navy) in 1794. The Marine Corps of today cite their beginnings with those of The Continental Marines to this day, with their “Birthday Ball” – celebrated yearly on the 10th of November. 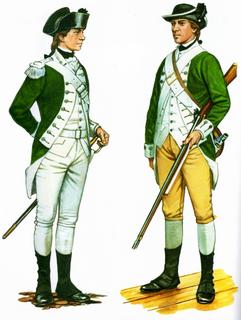