Formed as a Regiment of Militia in Rhode Island, during the ''emergency'' which would become The American Revolutionary War in 1776, The 1st Rhode Island Regiment had the dubious ''honor'' of being the first Colonial Regiment to induct Black Americans into it's ranks. Since 1775, Black Americans (former Slaves) had been denied enlistment into the recently formed Continental Army. Their numbers very small, such a boost in enlistments would have been no major shift. However, by 1778 – The Rhode Island Regiment had been depleted severely through combat loss. It was decided to allow Black Slaves to serve in several Companies of The Regiment. Commanded by White Officers, the nicknamed ''Black Regiment'' was formed.

Owners were compensated for their ''sacrifice'' at ''fair market value''. These Slaves were told that should The American Colonies ''win The War'', they would be given their freedom. The Regiment also now welcomed the few Black Freemen who volunteered to serve. Again, combat losses would afford yet another first. White and Black Soldiers were integrated in several Companies. When British Forces invaded Rhode Island in 1778, The reconstituted 1st was engaged for the first time. They held off three successive charges by German Hessian Forces. Eventually, other weakened Continental Units began to retreat from lack of powder and casualties. The 1st Rhode Island stayed their position and did not retreat – thus winning The Battle. With British efforts shifting South, The Regiment served mostly in it's Region – without major combat. In 1781, they were deployed to The Hudson River Valley (New York Region), to battle ''renegades and brigands'' attacking American interests.

By 1783, The Regiment was sent (several Companies), to The Siege at Saratoga (New York). It arrived to participate in the end battles of that engagement. Discharged after The War, The State of Rhode Island indeed kept their word and freed those 1st Regiment soldiers ''sold into'' slavery. However, the inducement of service for soldiers of ''100 acres of land'' was not given to all of the Black soldiers. They were however granted pensions, which would be a cause for several instances of rebellion by Veterans of other States that failed to provide such. 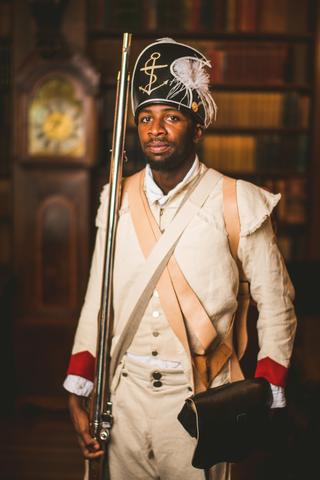