Formed in support of American Independence from Great Britain in The Revolutionary War of 1775-1783, The 1st New York Regiment of Infantry was composed of (5) Companies of Volunteers. They were also one of the first to help form the nucleus of The Continental Army, commanded by American General George Washington. The Regiment participated in The Invasion of Canada (1775) and the decisive engagement and first American victory against The British Army at Saratoga (New York, 1777). The 1st New York also participated in The Battle of Yorktown (1781), which saw the surrender of The British Army under Lord Cornwallis. They helped storm The British Defenses at the epic Charges at Redoubts #9 and #10, with French assistance. Disbanded in 1783, The 1st listed casualties of 200 Officers and Men, killed or wounded during The War. 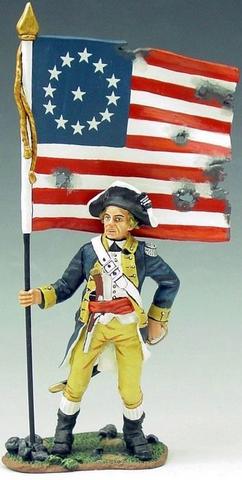