The Almoravid Dynasty was formed in 1042. Centered in Morocco, these Berber Peoples consolidated multiple Tribes and removed those refusing to comply. Moving outwards from Northwest Africa, The Almoravid soon overtook The Al-Analus (present day Iberia). Iberian Christians were forced to either convert, run or die. The Reconquista Forces of Rodrigo Diaz  (aka "El Cid"), clashed with The Almoravid repeatedly in his attempt to clear them of Iberia.

Skilled Horsemen, The Almoravid maintained an Army of Infantry and Cavalry - with greater emphasis placed on it's Cavalry. They fielded both Light and Heavy types. With regards to their Light Cavalry, they wore no Armor. They also did not use traditional Helmets. They preferred a below waist, Burka-style heavy Linen coat  (very similar to The Gambeson).

Light Cavalry favored the Spear and Shield. Their primary tactic was a "Wave Assault", of overwhelming and Enemy by sheer numbers. Regarding The Almoravid "Heavy" Cavalry, they did attempt to adapt their tactics and deployment with what they experienced with Their Enemy. They used some Armor, mostly Chain Mail and some Helmets. They too preferred the heavy Burka. Also like their Light "Brothers", they used Shield and Spear - and using the Sword as well.

The Almoravid Dynasty lasted only until 1147. Over-stretched Territorial defense against The Christians, as well as allowing Rebel factors to grow. The Confederation of three disfranchised Tribes (calling themselves The Masmuda), took advantage of not only these issues, but the lack of an Heir to The Almoravid (their King died in 1147). The Almoravid ceased to be after this date. 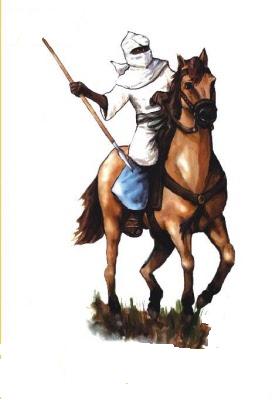