The youngest Son of King Aethewulf of Wessex, Alfred was his second Son to claim the throne (his older Brother Aethlred I died). The Early years of his reign were taken up by the struggle (for his and his reign's very existence) – with The Great Danish Army. This culminated in the near collapse of Wessex after a surprise attack on his Manor House in 878 A.D. - almost ended with his death! His Army and Kingdom in shambles, Alfred hid in the marshes of Somerset. Their, Alfred gathered what was left of his Army and re-trained them in more “gritty tactics”. This was never more clear than his defeat of The Danes at The Battle of Edington. Surrendered, The Danish King was baptized into the Christian Faith (after which he promptly withdrew his forces).

Alfred began to reorganize his defenses of Wales. Creating a series of Burgh Defensive Structures – Alfred also created a makeshift Navy to engage future Viking attacks at sea. Developing diplomatic ties with The Kingdom of Mercia, Alfred married off his daughter to The King of Mercia. Alfred was known by now as the only English ruler NOT under Norse Authority. In 886 A.D. Alfred and his Armies advanced on The Danes in London and recaptured the City. In a good spot, Alfred's years of preparation were finally about to be tested.

In 892 A.D., a large Viking Army from Francia landed in England. Alfred and his Army resorted to “Guerilla” warfare to attack and harass the vastly superior Viking Force. Slowing them down so that they could not resupply, Alfred was able to break them up by 896 A.D. Devoutly religious, Alfred felt that The Viking attacks were a “punishment from God” for England's “laxity towards it practice of religion”. Any form of organization or standardization was lacking any direction from The Church. Alfred began to institute education reforms to make becoming a Clergy more difficult. Alfred also had a keen sense of history and was responsible for “starting” the famed “Anglo-Saxon Chronicles”.

Although many think that his title “The Great” was given to him during his lifetime, it wasn't. The term appears in a general form in a 12th Century biography of Alfred. It's actual use of “The Great” developed in the 16th Century. Alfred is still the only English King to be granted such a title. Alfred died in 899 A.D. 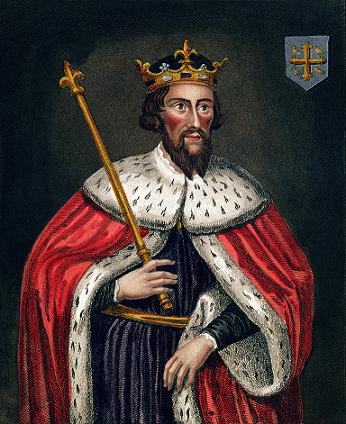