Located near Segovia, Spain - Alcazar Castle was built on the site of a much older Moorish Fort (and an even older Roman defensive structure). Documented in 1120 as having been constructed of stone and wood, Alcazar is built on a moderate sized plateau and resembles a ship's bow (or rather an artificial Spur design). King Alfonso began to recondition Alcazar - and by 1258, it was the primary residence of Spanish Royalty. An interior Great Hall was constructed to hold Spain's Parliament. Several of Spain's Kings and Queen were enthroned at Alcazar. In 1762, the Royal Court was moved to Madrid - and Alcazar was turned into The Royal Artillery School. Severely damaged by a fire in 1862, many of it's interior structures were destroyed. Reconditioning again took place in 1882. Mostly vacant, by 1896 The Royal War College was housed there. The castle features a Donjon style inner main Keep-like structure topped by 8 small rounded defense towers. There are multiple medium and small defensive towers positioned around the defensive wall system. These are gabled at their tops. Die to Alcazar's position, besieging it would have been extremely difficult. Alcazar features an impressive Throne Room and has one of the largest Armories of Medieval weapons in the World. The castle is cited as being one of Walt Disney's inspirations for "Cinderella's Castle". Alcazar is a popular Tourist spot in Spain. 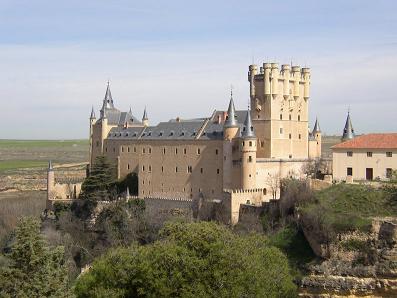