Also identified as The Albigensians, they were a 12th through 13th Century heretical group. Coming out of Southern France (The Town of Albi), The Albigensians were part of the larger Cathars. Unfortunately, most of what is known to history was written by their enemies. This (as often does), “clouds” a true picture of what the group was really like. Very little of their writings (themselves) has survived into our Age. Although a small sect, they were influential – coming at a time when people openly questioned The Church and charged it with being corrupt. Albigensians were opposed to the Priesthood. They believed that The Clergy was more interested in collecting wealth for themselves and influencing political control over Nobility. Again, their enemies furthered that the group was against Communion, Baptism and even the mere act of holding The Cross. This may not be true, put if it were – it established them as religious “Purists”. Many of The Albigensians formed small communes and lived in mountainous areas. Apparently, they were happy to be left alone. The Church (being what it was then), was not about to allow the group to continue. In 1209 (and again in 1244), a literal Crusade was formed to eradicate The Albigesians. French Royalty (with Papal support and troops) – began to hunt them down. Most were not even given the “mercy” of recanting their position. Massacre after massacre occurred. The last such was at the Castle of Montsegur in 1244 (their last stronghold). Only a few survived the bloodbath and these faded into history. 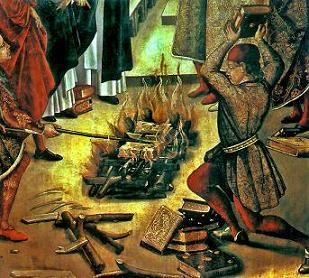