The Alae (aka Equites), were typical Roman Cavalrymen. They existed in some form during most of The Republican and Imperial Periods. Although their tactics and weapons changed from Period to Period, they served an important function in The Roman Army. These troops were specially trained in elaborate formations and tactics. Their primary function was to provide a protective screen to advancing Legions. Often heavily armored, they wore both Squamata and Hamata as protective garments. They used a Parma Shield (due to it's size and lightness) and favored the Spatha Sword (for it's length and use on horseback). They were paid more than an infantryman. Unlike the traditional later use of cavalry as "shock troops" (used to disrupt infantry formations), Roman cavalry often rode close to battle, dismounted - and fought on foot. This deployment was a precursor to 18th/19th Dragoon tactics. By the mid to late 4th Century A.D. - Roman cavalry began to adopt and use more traditional cavalry tactics and deployments. 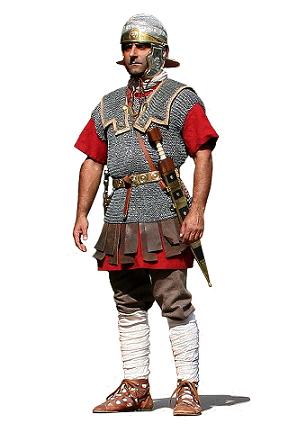